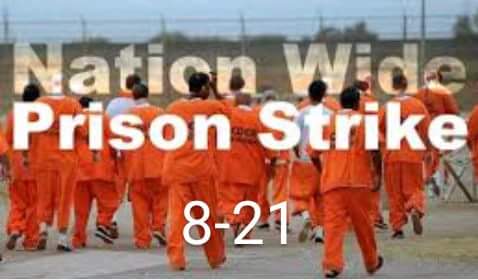 Today press release was given by confine citizens around the nation. The spokespeople for the Grassroots group “Jailhouse Lawyers Speak”, released a press release in relations to an upcoming prison strike. According to the press release the strike will take place in federal and state prisons across our nation in solidarity to address the current issues that are faced by the many men and women in our nation’s prisons. Said strike will begin on August 1st 2018 and last until September 9th 2018. the copy of the press release is below and States as follows:

PRESS RELEASE: NATIONAL PRISONERS STRIKE AUGUST 21st – SEPTEMBER 9th 2018
Men and women incarcerated in prisons across the nation declare a nationwide strike in response to the riot in Lee Correctional Institution, a maximum security prison in South Carolina. Seven comrades lost their lives during a senseless uprising that could have been avoided had the prison not been so overcrowded from the greed wrought by mass incarceration, and a lack of respect for human life that is embedded in our nation’s penal ideology. These men and women are demanding humane living conditions, access to rehabilitation, sentencing reform and the end of modern day slavery.
These are the NATIONAL DEMANDS of the men and women in federal, immigration, and state prisons:
1. Immediate improvements to the conditions of prisons and prison policies that recognize the humanity of imprisoned men and women.
2. An immediate end to prison slavery. All persons imprisoned in any place of detention under United States jurisdiction must be paid the prevailing wage in their state or territory for their labor.
3. The Prison Litigation Reform Act must be rescinded, allowing imprisoned humans a proper channel to address grievances and violations of their rights.
4. The Truth in Sentencing Act and the Sentencing Reform Act must be rescinded so that imprisoned humans have a possibility of rehabilitation and parole. No human shall be sentenced to Death by Incarceration or serve any sentence without the possibility of parole.
5. An immediate end to the racial overcharging, over-sentencing, and parole denials of Black and brown humans. Black humans shall no longer be denied parole because the victim of the crime was white, which is a particular problem in southern states.
6. An immediate end to racist gang enhancement laws targeting Black and brown humans.
7. No imprisoned human shall be denied access to rehabilitation programs at their place of detention because of their label as a violent offender.
8. State prisons must be funded specifically to offer more rehabilitation services.
9. Pell grants must be reinstated in all US states and territories.
10. The voting rights of all confined citizens serving prison sentences, pretrial detainees, and so-called “ex-felons” must be counted. Representation is demanded. All voices count!
We all agree to spread this strike throughout the prisons of Ameri$$$a! From August 21st to September 9th, 2018, men and women in prisons across the nation will strike in the following manner:
1. Work Strikes: Prisoners will not report to assigned jobs. Each place of detention will determine how long its strike will last. Some of these strikes may translate into a local list of demands designed to improve conditions and reduce harm within the prison.
2. Sit-ins: In certain prisons, men and women will engage in peaceful sit-in protests.
3. Boycotts: All spending should be halted. We ask those outside the walls not to make financial judgments for those inside. Men and women on the inside will inform you if they are participating in this boycott. We support the call of Free Alabama Movement Campaign to “Redistribute the Pain” 2018
as Bennu Hannibal Ra-Sun, formerly known as Melvin Ray has laid out (with the exception of refusing visitation). See these principles described here: https://redistributethepain.wordpress.com/.
4. Hunger Strikes: Men and women shall refuse to eat.
How You Can Help:
· Make the nation take a look at our demands. Demand action on our demands by contacting your local, state, and federal political representatives with these demands. Ask them where they stand.
· Spread the strike and word of the strike in every place of detention.
· Contact a supporting local organization to see how you can be supportive. If you are unsure of who to connect with, email millionsforprisonersmarch@gmail.com
· Be prepared by making contact with people in prison, family members of prisoners, and prisoner support organizations in your state to assist in notifying the public and media on strike conditions.
· Assist in our announced initiatives to have the votes of people in jail and prison counted in elections.
For the Media: Inquiries should be directed to prisonstrikemedia@gmail.com

This announcement follows the deadly riot in South Carolina that took place in Lee Correctional Facility Monday, leaving 7 men dead and an alleged 17 who were seriously injured and treated at an off-site hospital.

This also follows the riot that took place in Alabama in March of 2016 where Warden Davenport was stabbed.

It is time that we take a new look and what is taking place across our nation in our prisons. Not only is it important for us to take a look but we must also take in consideration that for years we have neglected what is “actually” taking place. You can rest assure that if something looks to be a mess from the outside, it is surely to be a disaster on the inside! We all know , or should know , that when an agency is in the need to have a public relations spokesperson the truth is rarely transparent and transparency rarely exist.

5 thoughts on “The announcement of a national prison strike to take place across the nation!”